Mahnaz Ispahani Bartos brings her expertise as the perfect Vintage Curator for Cast, selecting two special pieces for December. Inspired by the pieces she’s collected over the years, Bartos shares in our love of the mid-century modern era and our desire to bring elements of vintage into your every day.

Over her legendary career, Mahnaz has gleaned insight and foundational knowledge about some of the industry’s most renowned artists and creators. Using that unique perspective, Mahnaz selected two gold and diamond pieces that share in their subtle angularity. Their makers, the McTeigue brothers and Angela Cummings, both immigrants who found their creative footing once they came to the states, used intentional and thoughtful elements to convey their shared artistry and love of the craft.

Here, Mahnaz shares the story behind each piece and what drew her to these one-of-a-kind treasures.

On The Design: I love and collect safety pin jewelry—it’s a design we’ve always had in our collection, ranging from absolutely plain ones by Cartier to very lavish ones with diamonds and rubies from Van Cleef & Arpels.

One of the things I love about safety pins is their amazing ancient history. There are those that people make and now wear as earrings, which is supposed to be very revolutionary. But in the '70s, we wore them wherever we could. They date back to the Etruscans and even the Bronze Age. The Romans used to tie their togas with the fibula, which is the historical progenitor of the safety pin.

While others think of it as something to put on baby’s diapers, I love thinking about the design as a little techy device. It's practical, fantastically dynamic, and a historical piece. One of my favorites is this McTeigue style, where you have the head of the pin just covered in diamonds.

On The McTeigue Brothers: If there's an iconic American jeweler, it would certainly be this family, who are now in the fifth generation. They were all immigrants from Scotland, and Walter McTeigue, the original founder, was 25 when he started the business. He ended up producing for other companies, including Tiffany’s, and then Tiffany’s ultimately ended up buying their merchandise, buying their studio, and all of their archives. The McTeigues are really known for being specialists in the diamond trade.

On The Ways To Wear It: Women will wear a shawl and pin it on their shawl. Some women will put it in their hair—brooches were originally often made for the hair. You can do a beautiful ponytail and put your safety pin in the hair or put it on your lapel like a clip.

On Influencing Modern Fine Jewelry: People are now thinking in these simpler, more pure forms. I think the appeal of these jewelers is that modern day designers are now less interested in heavy ornate work, and jewelers themselves are being attracted to more classic forms.

"People are now thinking in these simpler, more pure forms."

On The Design: These earrings are very geometrical in a certain way—they’re actually almost a perfect example of her diamond designs. She has worked with such a range of stones, but she likes to stick to simple geometric forms. They're just very pure. And the diamonds are used thoughtfully, almost sparingly and meticulously placed on each earring. She was very intentional with them, which I love.

She was probably the most artistic of all of their designers. And she was trained not only as a goldsmith in Germany, but she also had a degree in art history. She had a very wide interest in and knowledge of different processes and different stones in jewelry design and she played with geometric shapes. She used a real variety of stones in her work, using diamonds actually quite sparingly.

We have sold a lot of Cummings's work. We really love it. I personally love it. And I find that clients across generations admire and love it—they collect it.

Craftsmanship: The McTeigue Brothers and Angela Cummings were both visionaries, designers who understood beauty and were able approach the industry by really thinking for themselves.

Beauty: Known for their love of diamonds, the designers appreciated the stone but took different approaches to using it in their work, one coating entire surfaces with the other using them more sparingly for effect.

American-Made: Both McTeigue and Cummings came to America as immigrants, had American careers, building their businesses and identities here. To this day, their value is still very prominent today for the brands and the enduring legacies they’ve left.

A Letter from our Founder, Rachel 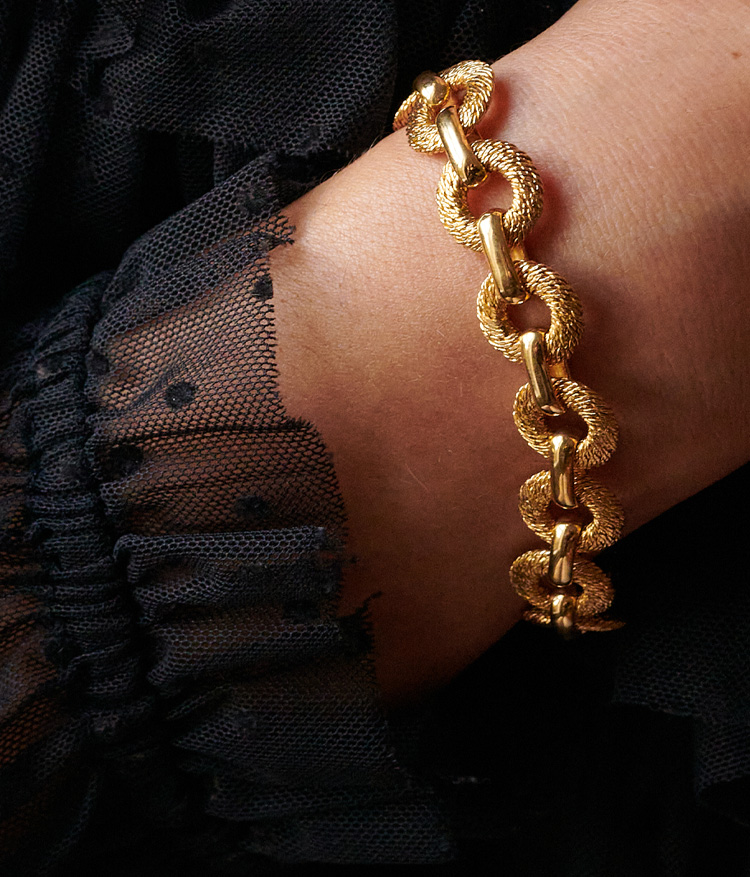 Tax and shipping calculates at checkout

There is nothing in your cart...